Ahmed Deedat and the Deity of Christ (David and Anthony LIVE, 8:00pm ET)

25:25 everything you said was taken out of context. Can’t believe so many brain-washed Christians believe in you - yes, of course, they will believe in you, you’re not the first white man they obey.

just me or does David Wood looks like a pig? maybe he eats a lot of pork

My heart goes out to you both as loving fathers of children who are not well. In these times we think the doctors can fix most things so when the illness is so rare or a mystery, the sense of helplessness must overwhelm at times.

However as Christians there is a peace to hold on to that the world does not understand. God Bless you both as well as your families. I watch your videos so much I feel like I know you personally. hahahaha!

David wood us the greatest CLOWNS OF ALL. HAHAHA YEAH

This David wood such clowns and full of lies. 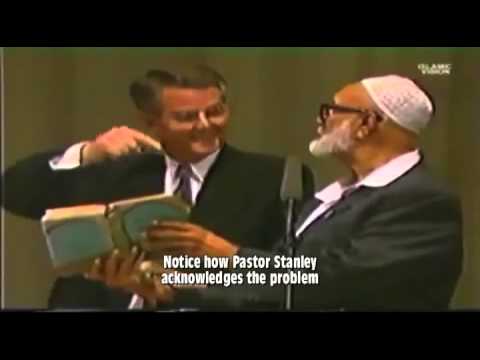 Toxic arguments which turned against A D. getting a stroke which muted him.

guys watch the debate for yourself. shorrosh got ko’d
he gave the context after that

May the Risen Son, the Healer beam His mercy on the families of Anthony Rogers and David Wood.

What if Anthony’s daughter grows up and converts to Islam?

Muslims learn from the holy books, Christian learn from any jokers they want.

Speak truth to power that is what Jesus it cost him everything. You will never walk alone.

1:01. Deedat got that one right. Jesus Christ has his own separate body from the body of the Father. Jesus wasn’t trying to convince otherwise. 2000 years of christians in apostasy misinterpreting Jesus isn’t good proof of what he was saying. There were many early christians who didn’t have the interpretation that David is proposing.

David and Anthony didn’t tell us what scripture that was. I looked it up. It is Colassians 1:15.

We need a new video of David and Anthony asap please. There is a British series that claims there are scientific miracles of Islam. It would be great if you cover some or all of them.