Bart Ehrman on the Qur'an 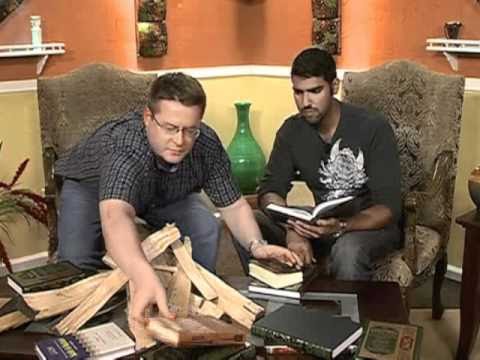 Click here for a printable PDF pamphlet of the information contained in this section. Surah 15:9 of the Qur’an proclaims: We have, ...

Bart Ehrman is regularly hailed as a hero for Muslim apologists. But would his critical methods be as warmly welcomed if applied to the Quran? Bart doesn’t seem to think so.

if hes not afraid making such a stupid comment…hes not afraid at all…he is more afraid he will fail…anyway after 50 years christianity wont be alive anymore with this rate its dying fast…people become atheist or muslim…fact !!! People will ask …Who the heck was Bart Ehrman ?? they say : oh wait thats the guy who wrote about that religion…whats that called ?? the 3 gods in 1 remember ???

nonsense tiktok and youtube full with exmuslims scream loud they left islam…guess what they are still alive lol…there is nothing in the quran to critique…the quran is another level.

Repent of your sins and believe on the Lord Jesus Christ, believe in your heart that He has died for sins and rose from the tomb on the third day and let the Holy Spirit within you, and you shall be saved. Amen

Ibn Warraq is the pen name of an author who does use logic and history to question the veracity of the Koran. He references the work of other critical scholars as well.
A place to start if you’re interested.

I think when he start criticize Quran that the time for him to suicide… aka failed.

Prove that Trinity is not the worship of 3 Gods but One God? Trinity will never be accepted by your mind, Mind and wisdom as One God.

because he wasted a lot of time on the pagan bible

“The likeness of those who disbelieve is as the likeness of he who calls to that which does not hear, except a shout and a voice. Deaf, dumb, and blind, they do not understand”
surah Al Baqarah ayat 171 (QS 2: 171)

There is a violent and a less violent interpretation of his statement. I trust Muslims to cherry-pick either depending on what is convenient.

Studying the Quran in depth is much better than all those years of biblical study. Studying the bible in depth change him from christian to ex christian and now hedging in between atheism and agnosticism.

He wouldn’t criticise the holy quran because he knows he won’t find any flaws. The Quran itself challenged anyone 1400 years ago to find flaws and if they can’t find any then just write something similar to the Quran not the whole book but just an Aya (verse) yet no one ever could, nor will they. Sobhan allah.
Search Ali mansour al kayali on YouTube.

What I understand from what he said “it’s so badly written,that if I ever stop valuing my life,I will torment myself with this book”

Why don’t you upload the full version of this video?

this isn’t hilarious it is stupid and shallow, I know Dr. Bart is an intellectual person to say something so silly and ignorant, how would anyone evaluate or judge on something without examining it? this is a stupid preposition comment