According to the Quran, everything will perish . . . except Allah’s face (28:88; 55:26-27). Since Allah has legs, hands, etc., we have to conclude that all of Allah’s body parts, except his face, will perish. Anthony Rogers discusses the problem with Islamic theology.

If you liked this video, check out my favorite videos of all time:

Hahaha this David Wood is a jerk. Such a great Christian he is…the one who implores “THE ENEMY OF MY ENEMY IS MY FRIEND” tactic. Sells his Christian soul to jews and atheists just to make Islam look bad. Wow David. Such a noble Christian. I have Christian friends who are nothing as sick as you You are a psychopathic narcissist

why did you cut the part and took it out of context at 3:35 he also said except for his face means not literle face but it means except him everything will be vanish or gone

Dude, all religions are based on assumptions that were written down by some people at some point in history. People today can interpret those writings however they like, some are fundameltalist-extremist, others see the scriptures for what they really are: a moral code that is mostly presented through metaphors. We need to stop arguing about whichever religion is right, but admit that they’re all just a bunch of biased old rules.

Other translations don’t use the word face. Looks like you are using Sahih International or the Yusuf Ali one

Jesus is Black. He died and on the third day got out of the grave and ascended to the Heavens. But mohammed was poisoned by a Jewish woman, who of course was Black too. She got him good! How humiliating, poisoned to death. She played him like a fiddle!

Magic mirror on the wall,
Who is the fariest one of all?

Al-Zumar, verse 7 (39:7) :
If you disbelieve - indeed , Allah is Free from need of you. And He does not approve for His servants disbelief. And if you are grateful, He approves it for you; and no bearer of burdens will bear the burden of another. Then to your Lord is your return, and He will inform you about what you used to do. Indeed, He is Knowing of that within the breasts.

Al-Ghafir, verse 4 (40:4l ) :
No one disputes the signs of Allah except those who disbelieve, so be not deceived by their (uninhibited) movement throughout the land.

Al-Quran: Surah Ghafir, Verse 35
(40:35) : Those who dispute concerning the signs of Allah without an authority having come to them - great is hatred lot of them in the sight of Allah and in the sight of those who have believed. Thus Allah seal over every heart belonging to an irrogant tyrant.

A Catholic sister asked Yusuf Estes-Why he accepted Islam- 2011 - YouTube check in this and you all see this “beliving in jesus” this people follow their religion just to make moneyy, the first thing is to make money and the second is the religion,but the islam its not like this!.. 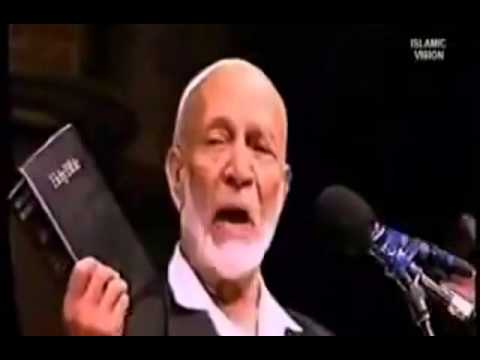 you all are weak man feel so bad for you all

How bad i feel for all the christiany ! you all are so stupid man i cant see the all ignorance here omg hahaah , you cant even explain the hole trinity and now you are the scholar of islam hahaahh so bad for you all cause you dont even read a book

How can one be this clueless.educate yourself,know what you are talking about.until then don’t spread your toxic opinions.speak from facts.

This is fascinating… I’ve never had a Muslim tell me about his god having a face!!!

Actually there is a type of psychosis in which the sufferer does ingest their own flesh. It is known as self-cannibalism or autosarcophagy. Allah may be a sufferer. The symptoms don’t lie!

Sorry, that is the whole point…god is not a man…therefore how will you decapitate him…when He created all that is in the Heavens and Earth…sending prophets like Jesus to spread His word…

And behold Allah will say: "O Jesus the son of Mary Did you say to men, Worship me and my mother as gods besides Allah He will say-“Glory to you I could never say what I had no right (to say’)” (Soorah Al-Maa’idah- 5:116)