According to our earliest Muslim sources, after Muhammad fled from Mecca to Medina, he supported his religion by robbing Meccan caravans. Muslims even killed a man during the Nakhla Raid, when there was a truce between Muslims and non-Muslims. Qur’an 2:217 was revealed to justify the attack.

why do you guys lie? there’s never a stories of Muhammad saw doing this, learn before you talk

Forbidden by whom? Forbidden by Allah. And here we have some serious believers in Allah. Who don’t believe Him when it mismatches their opinion.

If you don’t understand them, these bastards would eventually trap you into their lies and assumptions.

“life is back to normal” a mere assumption amidst the fact seekers.

When informing people of Gods messages it is important to be exact and accurate, or we just prove the need for these prophets, for they would not lead people astray, there can be no faults in Gods words, if something is sounding incorrect it is the human being whom said it. When you look into a well and see the moon is the moon in the well? Or is it the well reflecting something bigger such as the moon in such a small hole. Just as you see the foams of the sea and not the sea itself in entirely.

he allowed them to continue to harass his people and him until the pain was unbearable, hoping they would eventually change. After time and time again they abused his patience and kindness as weakness. getting hit 100 times and consecutively forgiving so they can hit 101 times will not be effective when with fools. For if they were not fools they would have stopped quite sooner out of decency.

This either shows your IGNORANCE or HYPOCRISY or SATANIC POSSESSION running in your veins. Pls be educated that the small muslim community in mecca then were boycotted (they were not allowed to sell, buy or even beg for food, they were forcefuully stopped from leaving mecca) for a good 3 Years, they starved. When they finally snicked out of mecca with only their a handful of clothes their belongings and valuables were seized taken on caravans and sold in Syria. Their houses were auctioned. Some of this early musliims like Abubakar were very rich but all their wealth was taken (stolen) by the meccans. So having been educated thus, what other slander and lies do have to say more ???

Sam looked like medieval middle eastern Executioner here. Now he looks like the villain of Prince of Persia.

stealing is bad but its not bad when mohammed does it, because it says so in the Quran.

you caravan? have to ask a question as why Muhammad attacked caravan. Pagans forced Muslims away from Makkah and take away all their properties they were not allowed top go to medina with their properties. So the first to steal was your fellows Pagans of Mecca then Muhammad just retaliated and took away the stolen properties from the thiefs

Mohammad will kill you for not KILLING for him. He loved blood, the smell of it, torturing people, eating the people he killed. He was a sick evil demonic person. He was inhumane!! But he’s DEAD now. Islam REPRESENTS the SPIRIT of SATAN and the DEMONrat party

They have the GAP and just Blabbering and My prayer they get guided in the right path…Are they fooling the ignorant or guiding the intelligent with wisdom to research and search for the truth ?

Please check the below links to saperate truth from falsehood. 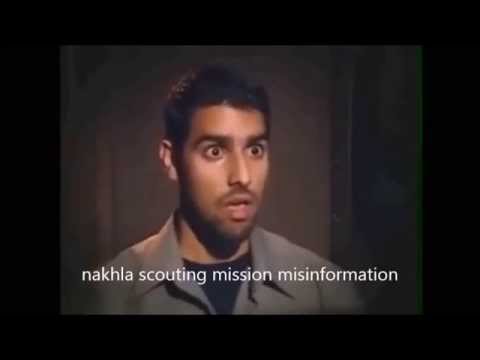 David u r the man, people like u required on this earth to expose Islam… And prove islam is shit religion…

I am gonna respond , because this guy is a liar , let me start by saying: does jesus teach you to lie about other poeple ? you are a disgrace to Christianity
1- ‘‘when Muhammad got to Medina he has the chance to live in peace’’
ok let’s take a look at what the meccans did to the Muslims:
Killed their wives, Mothers, Fathers, Stole their money and their belongings, expelled them from their houses . take a look at someone called Ammar Ibn Yassir . they made him watch as they killed his parents , his Mother Sumayyah bint Khayyat had a spear driven through her private part as her son was forced to watch.
Now Muslims escaped from this persecution to Medina : They never attacked caravans Unconditionally , they only attacked the Quraysh, there’s a big difference from attacking random caravans from all over arabia and the Quraysh. The Quraysh , yes definitely the companions of the prophet (pbuh) attacked them, Why? because of 13 years of oppression , because they were expelled from their homes and their land, the Quraysh expelled them, took all their money and belongings, The companions had no money when they left for medina ‘‘These people wronged us, we have the right to do the same back to them ONLY’’