To prevent ongoing argument and hostility, David Wood extends an olive branch to Muslims by sharing his favorite verse of the Quran. The verse is Surah 33, verse 53 (Surat al-Ahzab, Ayah 53), where Allah says:

“O you who believe! Enter not the Prophet’s houses, unless permission is given to you for a meal, (and then) not (so early as) to wait for its preparation. But when you are invited, enter, and when you have taken your meal, disperse without sitting for a talk. Verily, such (behavior) annoys the Prophet, and he is shy of (asking) you (to go), but Allah is not shy of (telling you) the truth. And when you ask (his wives) for anything you want, ask them from behind a screen: that is purer for your hearts and for their hearts. And it is not (right) for you that you should annoy Allah’s Messenger, nor that you should ever marry his wives after him (i.e., after his death). Verily! With Allah that shall be an enormity.”

A closer look at this verse shows what the Quran really is.

For more information about the Quran, be sure to watch these videos by David Wood:

“A Brief History of the Quran”: 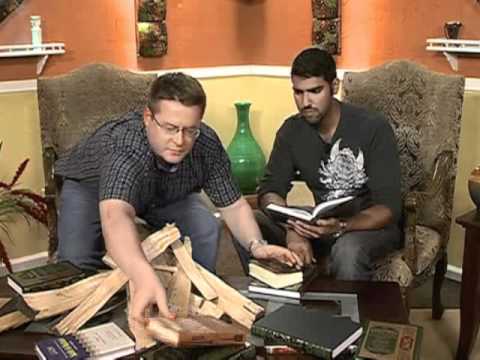 “Why the Quran Was Revealed in Arabic”:

“Ten Fast Facts You Need to Know about the Quran”:

“The Sheepgate Conspiracy: How Muhammad’s Wives Changed the Quran”:

For more on the Quran, check out these videos: - YouTube

Mr David I have a question tho. You insist on being so knowledgeable about the prophet Muhammad (pbuh) and is able to perfectly interpret the Quran. About the scientific miracles how did Muhammad’s “puppet” know that iron came from out of space and that there’s waves upon waves in the deep sea. He’s only a guy that lives in a desert. Also how did he know that the human body is made of water. Either Muhammad and his “puppet” are the first to discover these scientific facts 1400 years ago or they were actually sent to him in a revelation.

I didn’t see anywhere on surah 33 verse fourth to five. An abolishment of adoption🤨

Bro is twisting surah 9 verse 29. Allah is commanding the Muslims to kill the disbelievers IN THE BATTLEFIELD. The disbelievers started the war and Allah is just commanding them to fight back. The quote is most often used out of context and by people who wants to sway you from the religion of Islam. Would a religion that was cultivated by the devil command you to avoid fornication and adultery or lying and stealing. Would a religion cultivated by the devil command you to treat your neighbors with respect and hold your parents to the utmost respect. These are the same teachings of Jesus Christ reiterated. Instead of listening to this so called debater with bias prejudice. If you really want to know if the religion is false do your own research or else this is just nothing but entertainment of ignorance. may Allah guide us all back to him. May we all see the truth before it’s too late. Peace.

This verse, and pretty much everything else, is taken quite wildly out of context. What this guy fails to understand is that Muhammad was a man endowed with prophethood with faults and flaws like all of us (as was Jesus, though Christians after the formal corruption of their faith at the First Council of Nicaea would not agree, but contemporaries of Jesus would).

Muhammad, as a man who did not decide his prophethood but yet lived a life of honesty and virtue even before prophethood, could absolutely foreseeably be frustrated by relentless inquiries; who wouldn’t? The context of this verse especially is that he had just become married to Zaynab bint Jahsh and understandably did not want to launch into conversations that night, but it is important to understand that he spent all his days teaching and defending Islam and acting as an exemplary Muslim. It was said that his patience was greater than anyone’s.

The ‘favorite’ verse emphasises two things: firstly, that Muhammad was a fallible man with finite patience (he is human, not God), and secondly that God will never veil the truth. Although this is a minor demonstration, God frequently relays advice to Muhammad on how he ought and ought not to act, and if anything proves that no stone is left unturned in the Qur’an.

This video might convince a Muslim who is weak of faith and has not done their research, and it may stroke the egos of Christians. To the latter, I advise you to tread carefully; since my reversion to Islam, I have found no clearer guide than the Qur’an, without the ramblings of the antichrist Paul comprising the majority of the New Testament. To the former, know that this man does not know nearly as much as a scholar (perhaps speak to a sheikh who knows Surah al-Ahzab very intricately), and that seeking guidance is an admirable feat. And no, these men are not “puppeteers”: they demand no payment from you, and their reward is dissemination of wisdom in itself.

This man’s smug ethos is not a substitute for honest “apologetics”, as he might brand it. His knowledge of the Qur’an alone are one single shovel of dirt from a vast mountain, most of the contents of which are known only to God.

I encourage anyone reading to take a step back and read The Study Qur’an by Sayyed Hossein Nasr. Yes, there are verses in there which appear strange at first glance, but it is said that there are 9 levels of meaning to every single verse in the Qur’an, ranging from literal knowledge to knowledge only held by God. This, at least, will help you to discover three or four levels deep without taking verses out of context.

He fully roasted the quran and Mohammed the naughty boy

Oh man , did I get that one wrong . Last time I was attached to a breast neither I nor she felt a parent child like relationship. Also it did NOT work as far as prevention goes .

What you did was make up stories taking Quran and Hadith from out of context.

Mohammed’s lust for women makes him out to be an false prophet that is impure.

Is he prophet or r kelly

Please expose this to the world

You make me laugh