Speaking in Florida This Monday 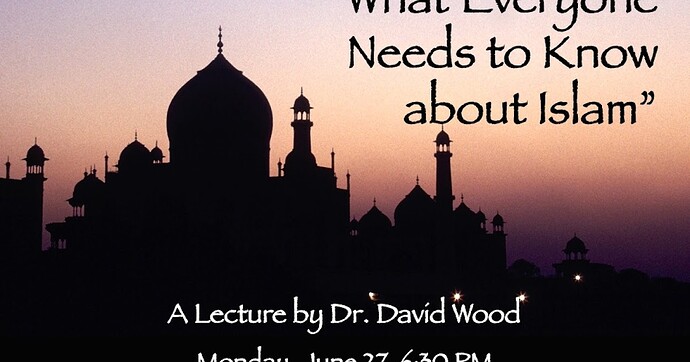 Speaking in Florida This Monday (June 27)

Hey David, you must plan to visit India some time. You have a pretty good number of followers here. What I want people here to be educated is the fact that the ideology of islam itself is the culprit. There is a perception here that islam is good but muslims don’t keep up with its good teachings. There is a hatred for muslims at subtle level. I wish people are educated that muslims have fallen prey to this evil cult and any opposition must be strongly directed towards the ideology rather than the people.

I live locally to Winter Park, FL. I wish I had made it to your speech. Anyhow, perhaps next time if there is a next time. Keep up the good work.

David, will you be posting a video of your speech?

Mr david wood .you have to check the flatearth .Tha bible is the only book that tells us like it is

Thank you for your courage David. You are a Rock. God bless you.

The Bible says,[1 Corinthians ‪15:21‬]through one Man(Adam) death came, also through another Man(Jesus) life has come : As soon as Adam ate of the fruit which was commanded to him not eat of, death came on him and to into every fibre and cell of his body.(“But of the tree of the knowledge of good and evil, you shall not eat of it: for in the day that you eat thereof you shall surely die”. Gen‪2:17)He knew this because he realised his nakedness. He became just flesh.He lost his luminosity. Our access to the heavens was cut off, death now become part of Man and became the ruler of his heart. He cannot see and walks in the dark(that’s why he walks in sin also) or cannot exist in the Light because he fears death continually and death rules his heart. This is the separation from God. Separation from the Light, The Love and the Life. Man(Adam) brought death upon himself out of choice because He has free will. This death, this separation past on from him to all of mankind and into all of his “world” because Adam hath death in his being…flesh, sinew, bones and fluids.This meant Man could only save himself from death out of choice and free will also. So if all men now have death in them past on from the first man, no one is worthy to redeem man death. For death cannot overcome death, neither can darkness overcome darkness. So GOD our Father; The Light, The Love, The Life, who never left his much cherished creatures, Mankind, while they were separated from Him, came to the rescue. “But when the proper time had fully come, God sent His Son, born of a woman, born subject to [the regulations of] the Law,” Galatians 4:4“And I will put enmity between thee and the woman, and between thy seed and her seed; it shall bruise thy head, and thou shalt bruise his heel.”Genesis 3:15 , meaning the Seed(Jesus) of the woman shall crush death and death shall lie in wait for to strike his heels.He spoke His Word into a virgin woman, Mary and she conceived and she gave birth to a Man called Jesus The Christ. John1:14. It is good to understand that Jesus was not conceived by sperm(seed) of man which has death in it passed on by the first man Adam but by an incorruptible seed, the very spoken Word of God. This is the reason he was born of a virgin so he(Life) could overcome and defeat death and bring all back to Life, literally. He was a man just like any of us but like no other, that is why he could heal the sick, walk on water, calm the storm and so on. Not just because he was God in flesh but he was really just living out the original plan for mankind, which is to dominate and subdue the earth as a Man. Death had nothing on Jesus, absolutely nothing. After that he willingly laid down his life to die, to be buried in death and rise up in Life. Like a seed is buried in earth and germinates and becomes a tree that blossoms and fruits. So Jesus Christ did. Out of his own free will he(Jesus) did this. John ‪10:18‬ (). Because man had to redeem himself from death by his own will.He died and rose again. Now one Man has defeated death, death no longer has it sting on mankind. Man(Son of Man) has redeemed Mankind from the separation from God.Awareness is now the thing! Do you know you already have Life? Do you know God has his arms stretched wide open saying welcome home all? But we have free will as men and we are responsible for the choice we make. It’s all Love with God, there is no condemnation. Look to the the Light and the darkness soon disappears! The tempter, the deceiver and accuser may prick your soul and say you’re not good enough and accuse you of wrong doing but it is all been forgiven of you if you would accept it(choice).

be safe brother, I pray that nothing bad happens to you or those who attend.

Hi David, love your videos. Are you planning to come to London, UK?

David, I will be praying for you

Maybe I will Uber over there. So I can be there.

Dear Bro David, We are praying for Gods protection over you. The enemy is really angry, your exposition is setting those who have been under the devils bondage free.Your understanding and dissection of Islam is amongst the best in the world. No wonder there is so much hatred towards you. The Devil is a liar. No weapon fashioned against you shall prosper. All the plans and devices of the enemy against you shall be rendered null and void in Jesus’ name. I will leave you with this passage from the Holy bible. Numbers 6: 24-26 “The Lord bless you and keep you;The Lord make His face shine upon you,
And be gracious to you;The Lord lift up His countenance upon you,
And give you peace- Amen

David, God bless you and keep you safe

Hey David,
We all know what muslims are capable of. Please take care, bring bodyguards because I can bet they hate you very much. You spread the truth, don’t let them stop you. You are so inspiring. But take care also.

Hilarious every time I watch this channel I get a commercial for an Islamic charity.

David, can I bring my own beer and bacon? Or do you only serve halal-bacon on this event!?

Will we be able to live stream it somehow?
Or will you be posting a video afterwards??