Terry Jones and Dearborn: Two Sides of the Same Street? 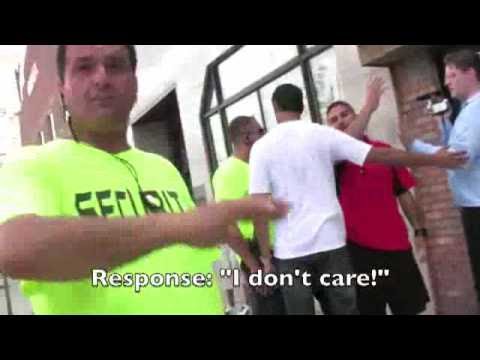 Several people have contacted us asking for summaries of the events in Dearborn. Since we didn't have a post with a complete summary, I thou...

Cossy Comitatus is against the Constitution. But in this case annihilate the suckers

so this is the religion of peace???

well your a dumb ass

there should be no law other then American laws

And, these aren’t even radical Muslims. The Muslims have extremely different understandings of what “freedom” means compared to the US.

David, can you make a separate video that is just the puppet portion of this video?

I call on every American to call the Dearborn police dept, and ask them what law they enforce, and is it safe to go there. I called and was transferred 3X’s till a nice Officer said and he insured me all religions are safe. (The first 2 people I spoke too, wanted no part of question) Dearborn is in Michigan right?

islam must be banned

At the end of the video the mayor was really trying to be a jerk…he knew that him and the police department in his city screwed up when they arrested david and nabeel for false charges. So he was trying to down play it with his smart attitude in this video…

You know, this country has to be the stupidest country in the world, to allow over 400,000 of these animals, that hate us, into this country!

THERE IS A CLEAR DIFFERENCE BETWEEN FREEDOM AND SUICIDE!

If giving a culture their freedoms in this country, will lead to our destruction as a country, then one must not offer our freedoms to those people!

Am i the only one that clearly sees that they are trying to bring their LAW with them, not just their religion?
If they love their religion and law so much, then wth are they here?
That my friends, its the question! And someone better
expose the answer before it is tooooo late for the once great America!
And all you ignorant American’s that support them and their freedom to instate Sharia Law, are just as bad as them!
Can’t you idiots see, that their culture, religion, and law, will NEVER mix with the other cultures that are hear???

Wow I was wondering if any type of civil law suit has been filed in federal court to address the obvious civil and constitutional rights violations that your group has suffered at the hand of Dearborn Police?