Sheikh Yasir Qadhi was asked about Muhammad’s relationship with Aisha bint Abi Bakr. Dr. Qadhi replied that he finds it amusing that women’s rights advocates would make Prophet Muhammad’s marriage to a prepubescent girl “a big issue” when Aisha herself didn’t make it a big issue. Is this a reasonable response? David Wood (Acts 17 Apologetics) discusses the issue. 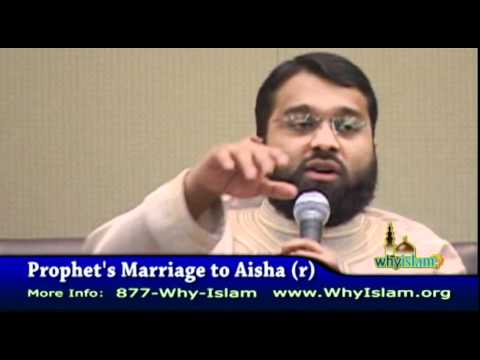 It’s so stupid of a scholar to givr such response. This Ayisha thing by Mohammed makes me so sick! Islam! What a religion.

Aisha didn’t complain because at her age, she couldn’t even understand what was done to her. Imagene an abusive and merciless religious founder and leader. No wonder his ideology of abusing, killing and destroying.

Recently, the popular muslim apologist Mo Hijab said that the quran teaches “extreme pedophilia”, and that even 5 year olds are not safe. The video of this is everywhere, and he can never again lie about it to non-believers. This cult is disgusting to the core.

For yrs i was puzzled why these problems seems more common in m0slem majority countries. Now i know where they got their inspirations from. Thanks to DW. The world needs more people like DW.

Just listen to your video… My God!!! How you speak the truth about this subject?

Authentic hadiths, Yasir Qadhi, and I strongly agree that muhammad consummates Aisha when she was nine years old

Recently asked a Muslim to explain my rights and how women are treated in Islam.
Asked several different questions etc.
He came back and said convert to Islam then he will tell me?

Mohammed (and consequently Islam) appeals to the lowest, basest, aspects of human nature.

The promise of an afterlife surrounded by big breasted virginal sex slaves.
The allowance and promotion of polygamy-for men.
The sanctioning of pedophilia.
Profiting financially through slavery.
Profiting financially by forcing non believers to pay tribute money.
Promoting deceit and duplicity through the doctrine of Taqiyya.
Promoting hatred and intolerance of those who believe, act and worship differently.
Entitlement to the land, property, houses of worship, and freedom of those who believe, speak and act differently.

What holy prophet of God would appeal to the carnal lust of men by promising a paradise of unlimited sex with big breasted virgins?

What prophet would demand his female followers to cover every inch of their bodies because he and his male followers couldn’t control their own carnal lust at the mere sight of female flesh?

What man with a shred of morality, let alone a holy man, would violate the innocence and purity of a pre pubescent girl?

What holy man would advocate slaughter, violence and subjugation of those who believed differently, and sought to impose his beliefs on those people through coercion, humiliation and bloodshed?

What true prophet would first admit dark and evil inspiration for his “revelations”? Then change his mind after being told differently by his wives?

The Jihadists who have followed in Mohammed’s footsteps will have a rude awaking once they leave this life, taking many innocent lives with them.
They have followed their false prophet through the gates of hell, on false promises of a hedonistic paradise.
The moment their bombs detonate, their souls will leave this life, and instead of finding themselves surrounded by 72 virginal sex slaves, they will enter eternal torment.
Somewhere in that torment, their false prophet is in agony, awaiting the final Day of Judgement.

Given what we know of Mohammed’s life, and the hateful and derogatory statements in the Quran toward non Muslims, women and other groups, it is inconceivable how this man is considered a prophet, let alone holy, and that people are even asking the question of whether Islam is a religion of peace.

It does give a fascinating insight into human nature. There are plenty of examples of other powerful and influential men throughout history who did similar crimes against humanity and inspired similar discriminatory books. Most of them are vilified today.

Yet Mohammed, his teaching and actions, not only get a free pass, they are ferociously defended by people who supposedly are against almost everything Mohammed and Islam stand for.
(I’m speaking to you, regressive liberals and woke warriors. Gender fluidity, pro choice, LGBT, feminism, equality… all of these things you stand for are diametrically opposed to the actions and teachings of Mohammed, yet you defend his teachings and deny any connection to the global consequences of his teachings, past and present.)

Yes, Islam is a Religion of Peace. Anyone who says otherwise in an Islamic state under Sharia law will see just how PIECE-ful Islam is.

The proof of the Religion of Peace(es) is undeniable.

How does Yasir Qadi know that the wife didn’t complain?

Mary gave birth to Jesus when she was 12 and was married to Joseph who was 90. Please Christians stop with this hypocrisy and study your religion.

Aisha’s stories in Islam are a direct insight into the weirdness of her life. I don’t know how any Muslim can read them without wincing.

David. Could you address Bacha bazi?

That why I say that Islam is made by the devil itself, mohmmed was just his messenger so are the Islam apologists today and in the past and the future. Messengers of devil. Make horrible things like a normal things

A child raised nearly from the cradle to be abused keeps quiet and thinks it is just her lot in life.